Genome DNA is a polymer molecule constructed from two interlocked chains/strands of four types of nearly identical chemical groups called nucleotides, labeled by letters A, C, G, and T. The two strands of DNA are complementary to each other: A in one strand always pairs to T in the other, whereas G always pairs to C. The goal of genetic sequencing is determining the precise sequence of the nucleotides in the genome. While knowing the genetic sequence already has massive scientific value, it is by comparing the genomes of different individuals that we can identify the small differences – sometimes consisting of a difference in just one nucleotide base – responsible for genetic diseases or triggering cancer. In the same way, small changes in viral sequences allow tracing the path taken by a virus when spreading from a country to another.

Genome sequencing is crucial for personalized medicine, as well as for tracking in real-time the spread of infectious diseases.

Massive parallel sequencing is the disruptive innovation behind the success in the former domain, while more recent Nanopore technology is triumphing in the latter.

Using a strand of the six billion nucleotides long genome, the complementary strand was synthesized nucleotide by nucleotide, checking what type of a nucleotide was being added at every step (e.g., one can use modified fluorescent nucleotides with the colors encoding for A, C, G, and T). The decade that followed saw the successful completion of the 1000 Genomes Project, and the 100,000 Genomes Project is currently underway. Moreover, thousands of full viral, bacterial, plant, and animal genomes are being sequenced and made available to researchers and medical professionals every year. This scaling up and the associated reduction in costs (sequencing a human genome now costs a few thousand dollars) has become possible by the on-chip sequencing technology, referred to as Massive Parallel Sequencing or Next Generation Sequencing (NGS).

A sequencing machine is fed a solution where a DNA sequence is replicated thousandfold and split into small fragments a few hundreds of nucleotides long. Billions of the fragments are simultaneously deposited on a chip. Just like in the older technology, the sequencing process consists in synthesizing the complementary strand nucleotide by nucleotide and detecting the type of the nucleotide being added, e.g., by its fluorescence. The speed-up is achieved by treating billions of strand fragments in parallel, although this necessitates marking each type of fragment by a special nucleotide sequence called “a barcode” so that one can reassemble the original sequence after the sequencing run is finished. Many types of sophisticated NGS equipment are now commercially available, and any serious biological research institution is equipped by a sequencing facility and technicians working to prepare samples and process the output data.

For the last few years, NGS is being rivaled by a less precise but cheaper and easier to use technology –  Nanopore sequencing. A Nanopore sequencing device is the size of a smartphone and can be controlled by a laptop. Its central element was borrowed from nature itself – a cellular pore that cells and bacteria use to take inside the molecules they feed on. In a Nanopore device, the pore is connected to electrodes that allow measuring the current passing through it as a DNA sequence is being sucked through the pore nucleotide by nucleotide, the current changes, indicating the type of the nucleotide being pulled through. A single drop of a DNA-containing liquid added to the device may contain millions of DNA strands, resulting in gigabytes of data stored in the computer controlling the Nanopore device, the full sequencing run taking just a few hours.

The Nanopore passed its field test during the 2014 Ebola outbreak, when it could be quickly and cheaply deployed even in the most remote regions of the affected counties, and allowed identifying, tracking, tracing, and isolating the new cases before the virus could spread further. As a mature technology in 2020, Nanopore sequencing has enabled the rapid sharing of the data in the context of the ongoing COVID-19 epidemics. Its obvious shortcoming is the necessity of preparing the initial DNA solution, requiring the use of laboratory equipment, costly chemicals, and the help of an experienced chemist or biologist. Once these preparations can be done on a chip, Nanopore may become a household appliance and a routine piece of equipment used during the airport security check or at a hospital waiting room, just like a thermometer.

Alex Reis In 2016, Canadian-based company Sixth Wave revolutionized the mining sector by launching a new product with the potential to increase profits by about $100 per ounce. This income boost comes from extra gold recovered, as well as savings during processing... 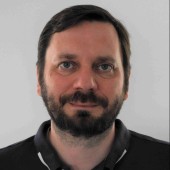 Vadim Puller has received his MS in Radiophysics from Nizhny Novgorod State University in Russia and his PhD in physics from Stevens Institute of Technology in New Jersey, working on problems in spintronics. He then worked in research institutions in several countries, working on such diverse areas of nanotechnology as polaritonic materials, carbon nanotubes, electronic transport in quantum dots and quantum wires, and nano-opto-mechanics. In 2014 he changed his domain of research to computational biology, developing algorithms for analyzing evolution of viruses. Since 2019 he is working as an independent scientific consultant, providing help to small companies and startups.